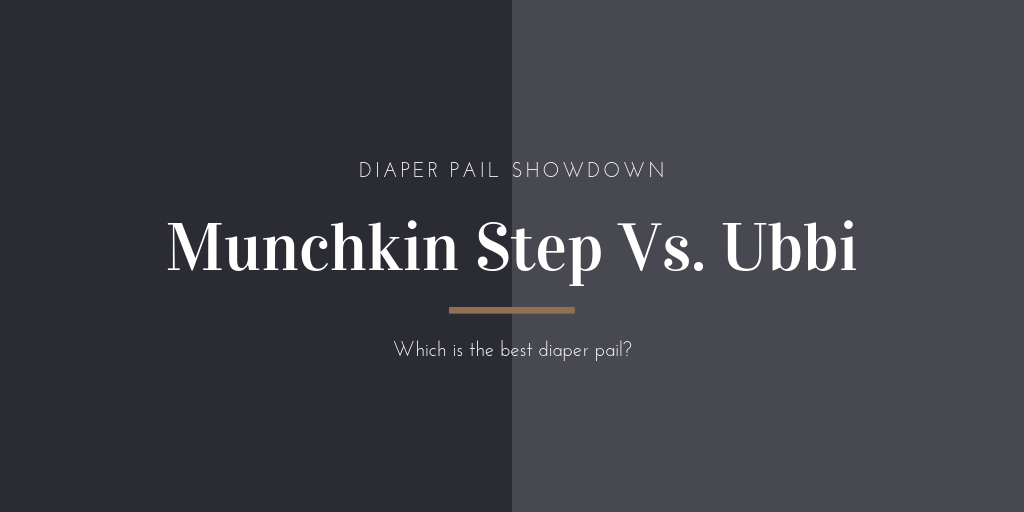 Ubbi Diaper Pail Versus Munchkin Step – Which Should you Buy?

Disclosure: The links below are affiliate links. This means at no additional cost to you, I earn a small commission if you decide to click through and make a purchase.

No one likes smelling poop, and no parent likes running out to the garbage after every poopy diaper. Enter the diaper pail to the rescue. Now you may have heard great things about both the Ubbi Diaper Pail AND the Munchkin Step Diaper Pail since they are the two biggest contenders in the market (and both have 4 star reviews on Amazon). So which one stands up the best to those stinky diapers and which one just stinks? Read on to find out which diaper pail wins.

The Ubbi diaper pail differs from many competitors in that it is made from a powder coated steel as opposed to hard plastic. It is designed to provide maximum odor control through the metal construction, rubber seals, and a sliding lid (which also has a child lock). Additionally, you can use any trash bag or cloth liner with the Ubbi Pail. This translates into you not forking over your hard earned money on buying specially designed diaper bags. It also empties from the top more like a traditional trash can unlike other diaper pails. Finally, it is available is 12 varying color and patterned designs, and it currently retails for $69.99.

The Munchkin pail is a sleek white design with a step on pedal to open. The pail has a mechanism which twists the refill as you close the pail – this is designed to keep odor sealed in. Additionally, it is designed to be paired with hammer baking soda “pucks” to really keep the odor at bay. Another benefit is that the pail works with multiple types of bags — both the snap and toss bags and the ring refills. The Munchkin Step Diaper Pail currently is listed at $64.99 with most retailers.

One final comparison that some may wonder about is size. The Munchkin Step Diaper Pail is definitely taller than the Ubbi Pail by roughly 4 inches. The Munchkin Step measures 27.63 inches H x 12 inches W, while the Ubbi measures 23.6 inches H x 15.4 inches W. However, this doesn’t mean that it holds more diapers because the bag design only takes up a portion of the available space in the bottom.

I honestly feel like they hold about the same amount when all is said and done.

My answer depends on your priorities here. If you are looking to spend less money over time and something that will last through multiple children, definitely go with the Ubbi. However, if you are looking for the very best odor containment with the least trips emptying the diaper pail AND only need for one child (or don’t mind repurchasing later), then go with the Munchkin Step for sure.

I will say that when you get to the stinkier toddler diapers, they both have some degree of smell since you have to open the pail to put diapers in. No way around that (until someone invents something better). This ultimately means that the smell lingers in the room regardless. Yes, the Munchkin does a better job containing the smell and yields slightly less lingering odor since the dirty diaper is sealed into a plastic bag instead of just dropping down. I personally would buy the Ubbi to save money and realize you should empty that pail at least once a day anyway.

If you’re interested in other baby must haves, check out our favorite baby items for 0-3 months.