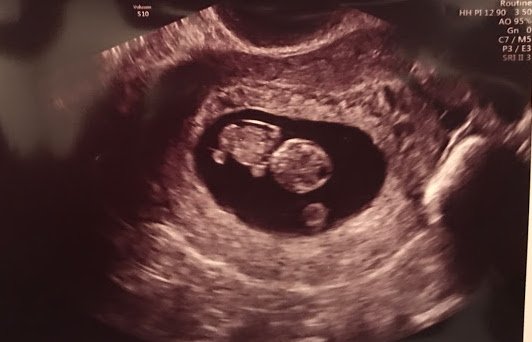 Even though I hadn’t announced my pregnancy yet, I’m wrote some of these updates in advance so that I could remember all of the details for later. I started this at week 6 for me and while I don’t look pregnant yet, I’ve definitely felt it over the last few months. The first week of July was incredibly busy with Parker’s 2nd Birthday and the Fourth of July holiday…so my pregnancy symptoms really hit me hard then with having so much to do and being so tired.

The first thing I experienced is the ever-so-common first trimester exhaustion. Even when I go to bed early, I wake up tired and feel like I could sleep a couple more hours. I have been trying to take naps where possible, but working full time and having a toddler doesn’t leave much time for that.

My second symptom has been food aversions and nausea. Like in my first pregnancy, the thought of eating meat makes me gag. The only thing I really want to eat are carbs, which I know isn’t good for me, but I can’t stomach the thought of eating anything else. I’ve also started having that all day queasy feeling. I don’t get sick every single day, but I do fight the nausea all day. The evenings are definitely the worst for me, which is the reverse of most people that I know. After my first appointment, I got a prescription for Diclegis, which helped me some during my last pregnancy. It does help some, but it doesn’t bring me back to being able to eat normally or not feeling any nausea. It also makes me sleepy, which isn’t a great side effect in addition to the first trimester exhaustion.

Another symptom which goes along with the nausea (and usually increases it) is a heightened sense of smell. I can barely change my daughter’s diaper, and I am gagging the whole way through. I can smell things my husband cooks the next day all throughout the house, and riding on airplanes with strangers can be horrible with all the smells.

The last symptom I’ve had (which I know from experience will likely get much much worse) is heartburn. So far it’s been manageable with avoiding acid inducing foods or using OTC medications my doctor has okayed. The only time is really makes me miserable is if I do actually throw up since all the acid burns my throat and leaves it sore and achey for several days afterwards.

So far everything in my doctor’s appointments have gone normally. Woo-hoo! They’ve done a few extra screenings since I had pre-eclampsia with my first pregnancy, but so far so good. I’ve seen the baby, it’s moving and progressing normally…and all my tests have come back within normal ranges. I am going to find out what I am having, but not until around 19-20 weeks, so I will update you on that in my 2nd Trimester.

As I reached the end of my first trimester, my nausea has gotten a little bit better, but it isn’t completely gone. Hopefully, it will go away completely once I am a little further along. Regardless, I will keep you posted, and despite all the symptoms..I am thrilled to be having a healthy and progressing pregnancy! The first trimester is an interesting time because you are hit with so many symptoms and feel terrible, and yet no one knows you are pregnant yet….so you have to be fairly secretive about it.