Disclosure: Links below are affiliate links. This means at no additional cost to you, I earn a small commission if you decide to click through and make a purchase.

One of the hottest toys this past Christmas was this playful animatronic FurReal Roarin’ tiger toy that responds to sounds and touch by Hasbro. We actually received this as a gift from my mother (thanks mom!) this last Christmas. Read on to find out whether I think the FurReal Tiger was a big hit or big miss before spending any of your precious moolah.

Firstly, what exactly is this FurReal Tiger? Well it’s one of the collection of FurReal Friends toys by Hasbro that is meant to serve as an interactive stuffed animal or ‘pet’ that your child can actually play with instead of just carrying around like they would a stuffed animal. He is animatronic, so he moves up and down on his legs (he doesn’t walk), blinks and makes noises. When your child roars at Tyler the tiger, he roars right back at them. He also has sensors in multiple places, so that he responds when your child pets him. The FurReal Tiger responds to over 100+ sound and motion combinations, and he also comes with a squeaky toy rubber chicken that he responds to as well.

The package does contain instructions so that you know how to interact with Tyler the Tiger and the motions and sounds he responds to. He roars, purrs and even farts (yes, farts). The FurReal tiger does require 4 C Alkaline batteries which are not included (why are kids toys always the obscure C batteries that we never seem to have?!?), and he is recommended for ages 4 and up. As far as I can tell, the age restriction is more based on his size and ability for your child to interact than any choking hazards. He is fairly heavy at about 4 pounds total, and even though he is covered in a soft fur, there is clearly a lot of plastic underneath, so I wouldn’t describe him as plush.

The list price for the FurReal tiger is technically $129.99 (which is super expensive in my opinion), but currently I see it being sold for $54.99 in several stores…so that’s more reasonable, but still pricey compared to a stuffed animal. I didn’t realize it before doing the research for this post, but Tyler the Tiger is just one of many options in the FurReal Friends line by Hasbro…you can also get StarLily, My magical unicorn; Chatty Charlie, the barkin’ beagle; Snifflin’ Sawyer, a Polar Bear; Jake, my jumpin’ Yorkie (apparently Hasbro is really against the g at the end of a word); Baby Giggles, my giggly monkey; Pom Pom, my Baby Panda Pet, Munchin’ Rex, a pet dinosaur and many many more. Many of the other options are cheaper than Tyler the tiger, and seem like they don’t do quite as much, so keep that in mind. However, it is nice that whichever animal your child likes, they likely have an option for you.

What’s in the box? 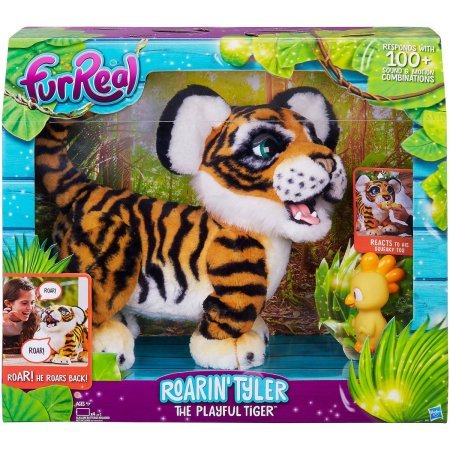 The FurReal Tiger itself of course, the squeaky toy, and instructions (no batteries).

On to what my final review of the FurReal Tiger…I have to say it is kind of a mixed bag on this one. I think that overall, with all of the hype and at the original expensive price of over $100, I was underwhelmed with this toy and would call it a miss. However, for the lower price it is currently at, and for a child who really enjoys animals, but does not have a real live one that they can play with…this would definitely be a BIG hit. I would say that between the ages of 4 and 6 would be the sweet spot with the younger side being the best (I do think that kids younger than 4 would enjoy this too, but since the manufacturers states 4+ on the package, I won’t recommend that to you explicitly).

If you have any of the FurReal friends, let me know in the comments below what your thoughts are. I’m interested to hear! Also, let me know if there’s another toy or product that you would like for me to review next.